Geocaching in the Southwest

Layla finds a geocache in Tompkins

Before this past weekend, we had never been out geocaching. We had a general idea of what it was, but had never actually tried it.

So, after downloading a cheap geocaching app onto my phone, I discovered that in our small town of Gull Lake there were three geocaches alone! A quick search outside of town and I discovered the area was teeming with geocaches.

We were well on our way, beginning with a geocache south of Maple Creek. It was a relatively easy find. I won’t give any details so I don’t ruin anything for other geocachers but a quick walk around the roadside and we had found it.

Our next stop was at the Maple Creek Cemetery where we had our first failure. This was a really interesting geocache. Once we were at the right location, we had to find a grave of an RCMP officer, which then gave us four digits to use to find the exact location of the geocache. Unfortunately, I did not know how to punch in co-ordinates on my phone and we were unable to find the cache. It was fun to look though!

Our next cache was at a rest stop on the Trans Canada but once again we had no luck and we began to think someone actually stole this cache.

After one find and two failures, we hoped our trip to Tompkins would be better. There are two caches in Tompkins and they were great finds. One helped us learn some of the local history of Tompkins, and the other gave us a tour of the town.

We found one more in Carmichael and learned more about the history of that town.

Our next geocache was south of Gull Lake near the wind turbines and this was a great find. It is a quiet side road and we spent some time just enjoying the landscape and looking at the massive turbines spinning behind us.

The next two were in Webb and this is where we found our favourite cache. We cannot give any details on it except to say that it is called Oh What A Webb We Weave and it is a fantastic hiding spot. Spend the time to find this one, it was wonderful.

We found two more along the TransCanada and two in Gull Lake. There is still one we can’t find in Gull Lake but we are going to keep trying.

Overall, geocaching is a great way to break up a road trip, get out and stretch your legs and become a detective of sorts. The app was only $10 and geocaching.com will show you ever cache in your area. Even in southwest Saskatchewan, there are hundreds.

It is also a great way to learn about history, the landscape and more. 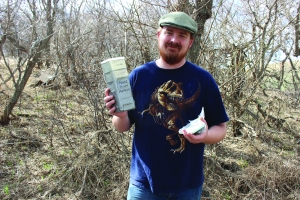 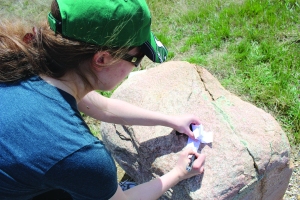